The Great American Whatever 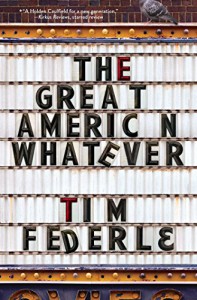 One-sentence summary: a quick read, and the story goes down easy, but the "cerebral" protagonist is too familiar from other YA novels (see: John Green, Becky Albertalli, David Arnold), and the author is so busy hitting his notes correctly that the result feels less like a plot and more like a checklist of YA.

Consumable. On the other hand, maybe the familiarity of this novel is one of its good qualities. If I were a highly verbal gay teen boy who loved to read contemporary novels, I'd want a big supply of them. Here's the formula: a contemporary young-adult story about a teen boy coming out and coming of age, with a high-concept hobby (making short films), a quirky habit (writing the perfect movie scene of his life when he's uncomfortable or under stress), and a first romance, all set against the backdrop of a tragedy that the protagonist is slowly recovering from.

Positivity. There's are healthy relationships and a fair amount of diversity in the book, and it's all treated positively. Quinn's best friend, Geoff, is rock solid (other than keeping a secret of his relationship with Quinn's late sister). Quinn's mom is overweight, but she's beautiful to Quinn, and Quinn is not ashamed of her--he sees the real her, not her obesity. Quinn is fully accepted by everyone who loves him when he comes out (they already knew). Is all of this too bland? Mr. Federle seems to want to restrict Quinn's true hardship to grief, and not burden him with more, which means his myriad other conflicts feel unnecessary and easily resolved. (The "betrayal" of finding out that Geoff was dating Annabeth didn't feel terribly authentic to me.)

First romance. I'm not sure why Amir is in the book, except to check off a couple of YA boxes (first romance, first sex). We know the relationship can't last because Amir is leaving town. There is some growth in Quinn's realization that Amir isn't a great writer, and that even though he's attractive, he's not a lifelong love. But is that the point of Quinn's growth? To see the world in more realistic detail? Perhaps this would work if Mr. Federle had introduced Quinn's problem as "seeing the world as a movie," so that his growth was learning that some things are just ordinary and not glamorous.

Ricky. In a similar vein, I wonder why Mr. Federle included the next-door neighbor, Ricky, who was Quinn's screenwriting idol and onetime mentor. Ricky's slightly disappointing reappearance (which really goes nowhere for the reader) seems only to serve the purpose of making screenwriting seem like a real job, not a mysterious, glamorous, unattainable thing. But that wasn't Quinn's conflict, was it? As a result we simply have a dropped thread: Ricky is in town filming a movie that actually tells the story of his relationship with Quinn--which should be a pretty big deal for our protagonist--but after Quinn visits the set we never hear about the movie again. (Of course, Ricky serves a practical purpose to the plot of living in L.A., where Quinn's film scholarship will take him over the summer, and we readers are meant to assume that he will house Quinn for free, making that trip possible.)

The writing. Clever, erudite, first person. We've seen this a lot. I also found that the beginning dragged--to the point where I would have put this book back on the bookstore shelf if I hadn't bought it already. Are we really going to talk for several pages about how hot it is in Quinn's room, and how he hasn't had the energy to do something about it? We literally begin with Quinn waking up in the morning. (Now I understand why writing manuals warn not to do that.) And on a slightly tangential note, I was disappointed that Quinn's film references were all classics, and that a person who adored filmmaking would categorically reject foreign films.

The issues. There are too many issues. A dead sister who was Quinn's film collaborator (but secretly not that interested in the art form, just a loving collaborator). Quinn blaming himself for Annabeth's death because she was texting him when she crashed her car. An overweight, grieving mother who won't leave the house. A best friend keeping a secret. The protagonist's coming-out moment. Virginity. Attention-deficit disorder. First romance. A film competition. Finding the oomph to get involved in life again after a tragedy.

Can we talk about dead siblings? So many YA novels use the death of a sibling as the backdrop for the character's conflict. In the U.S., we're so lucky in having this be a fairly uncommon life experience. Like red-haired characters, the percentage of dead siblings in novels has got to be many times the national average. It means death has become a trope. ("What can I throw at this character to hobble him at the start of my book?") I think that's actually counterproductive to our discussions about illness and death in this country--discussions we don't have enough of, in real life, with our family and friends. It's particularly a problem in this book because Quinn's sister is already dead when we meet Quinn, so we have no chance to become attached to her.